Frankie and Norma rarely performed together. At Frankie 85, the Count Basie Orchestra was delayed in setting up for the next set. Norma was the master of ceremonies and called Frankie out, and then Frankie asked the DJ too play “Shiny Stockings” from Frankie’s “Favorites” CD. Then, Frankie and Norma performed a hilarious impromptu dance – Frankie at his finest with his oldest partner. 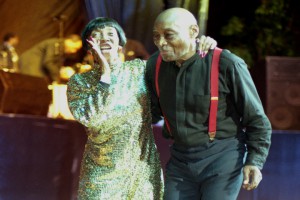 At the Savoy Ball in 2014, George Gee’s Big Band played along live to the 1999 video of Frankie and Norma dancing along on the big screen.